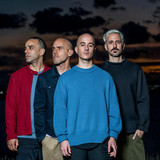 Cultura Profética (in English, Prophetic Culture) is a Puerto Rican reggae band formed in 1996. Despite primarily performing reggae music, Cultura Profética has experimented with genres such as bossa nova, tango, jazz, and salsa. Lyrically, the group discusses socio-political and ecological issues including Latin American identity and environmental concerns, as well as interpersonal relationships and love. Sobrevolando (2019) won a Latin Grammy Winner as Best Alternative Album and was nominated in the same category at the Grammy Awards. La Dulzura (2010) received the Gold Record for physical sales and its single La complicidad was in the Hot 100 of Billboard for more than 50 weeks. Canción de alerta (1998) was certified as a gold record by the RIAA. They were the first independent Latin musical group that recorded a Spotify Singles (2019). Cultura Profética has been nominated at the Heat Latin Awards 2017 and 2020, as for the Billboard Latin Music Awards. In 2015 they won the Gold and Silver Gaviota awards of the legendary Viña del Mar festival in Chile. They have reached records at massive festivals such as Rock al Parque and Stereo Picnic in Colombia, Vive Latino in Mexico and Viña del Mar in Chile; scenarios such as Luna Park in Argentina and Movistar Arena in Chile with two sold out nights in a row.   Follow Cultura Profetica on Spotify and YouTube to be aware of all the new releases that will come in the following months.