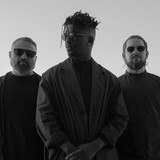 Sometimes, a band’s music registers just as seismically on an emotional wavelength as it does on a sonic spectrum. Animals As leaders—Tosin Abasi [guitar], Javier Reyes [guitar], and Matt Garstka [drums]—reimagine, reinterpret, and refresh instrumental prog, experimental metal, modern jazz, alternative, and even world music to a point where the reaction becomes primal on their fourth full-length album, The Madness of Many [Sumerian Records]. “What you’re hearing is the madness of the band, what happens in our heads, and what it sounds like when you put it all together,” exclaims Javier. “For us, that’s the sound of the new album. It’s simply the madness of these three individuals. We’re trying to create something that only we can do.” That’s why Animals As Leaders have risen to celebrated heroes of their respective instruments since first emerging in 2007. When it came time to begin working on new music in late 2015, the musicians possessed a clear vision for their next evolution.