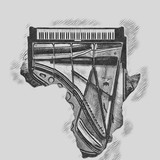 lf you asked a naive twenty-year-old Miles Davis fan what a young jazz musician's day-to-day might resemble, he'd probably describe Abel’s life. When he was in his hometown, Abel squatted at a Vedado apartment that an uncle of his, a professor at the university, had left vacant for a few years while teaching at another Caribbean university. He had moved in at age twenty three, a year and a half ago, and taken charge of 1ts upkeep. There were two mattresses on the apartment's floor: a double in the bedroom and a single in the living room where his friends often crashed. The only other pieces of furniture were an upright piano, a small circular table and two stools, and a table next to his bed with a framed photograph of himself and his girlfriend, who lived there with him. She'd helped him paint the place the color of old Pepto Bismol… Cuba the other side of the paradise By Julia Cook Read More www.abelmarcel.com/about