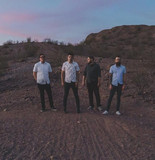 Hailing from the desert of Phoenix, Arizona, El West creates a soundscape with ambient, yet driving instrumentals, and powerful operatic vocals. Soaring highs and heartfelt lows allow listeners to emotionally and visually connect to the music. A powerful rhythm section allows the subtle melodies to build in to powerful crescendos like a wave of sound crashing over the top of you.  With two releases under their belt, El West has turned heads across the industry. Their Self-Titled debut EP garnered college radio play nationwide, charting on seven stations, reaching top 10 on each platform. They recieved consistant airplay on two major stations in their hometown, being added in to regular rotation. This led to them being chosen by Turner Broadcasting and Live Nation to open up for Capital Cities, Leon Bridges, GROUPLOVE, and The Chainsmokers on Day Two of the 2017 March Madness Music Festival. They released their sophomore release, "The Mainstay" in June of 2017. With numerous positive write-ups and reviews from media sources across the country and internationally for both releases, El West is gaining fans all over the world.  These beautiful, yet powerfully composed songs are arranged by El West's four members: Bryant Powell (Vocals/Guitar), Thomas Brenneman (Guitar), Ricky Powell (Bass), and Marty Welker (Drums).