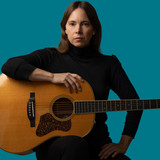 Spilling the tea of love and reading the leaves has been the leitmotif of Bronwynne Brent’s work for nearly a decade. “I know,” she sighs, folding into a southern drawl, “it’s not like I sit down and try to write love songs, but what else is more important than love?” Lauded by American Songwriter Magazine as “captivating”, Brent’s last release, Stardust, saw her voted Female Performer of the Year twice in a row by Americana UK and called up for television and radio appearances on the BBC. For her latest album, Undercover, the Greenville, Mississippi, native setup shop at Brooklyn’s legendary Daptone Studios. Conjured up with trusted collaborator and producer Johnny Sangster, Undercover is a deep Southern roux, combining simple elements of folk, blues, and jazz into a complex and flavorful brew of truth-imbued Americana. A multi-instrumentalist, industry veteran behind albums for Maggie Bjorklund and Mudhoney, Sangster brought in Mikey Post (drums) and Benny Trokan (bass) to fill out her sound. In an unlikely combination with Sangster, Post and Trokan, better known as the runaway engine rhythm section behind the 60s revivalist garage-pop of Reigning Sound, lay a thick, soulful foundation for Brent’s folk songs. The result recalls the soul-burners of 1960s Muscle Shoals. Helmed by Brent’s singular, bold, alchemical voice, Undercover is a ferocious amalgam of American roots music, at once devastating and empowering.