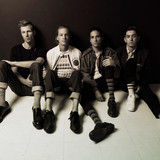 Bleeker represent a new vision for alternative music. With a charismatic frontman, tight songwriting, timeless seventies-style je ne sais quoi, and a delicate and unpredictable fusion of blues emotion and indie panache, the group redefines what the genre can be in the 21st century. By 2017, the Canadian trio—brothers Taylor [vocals] &amp; Cole Perkins [guitar] and Mike Van Dyk [bass]—had exploded as a buzzing international sensation in the sonic tradition of The Rolling Stones, The Killers, The Cure, The Black Keys, and Royal Blood. Following the release of their third full-length album and first for Five Seven Music, Erase You, the band garnered a prestigious Juno Award nomination in the category of “Breakthrough Group Of The Year,” while taking over Canadian television with appearances on CTV Morning Live, Global TV, and Breakfast Television as well as Europe’s Le Quotidian. The breakout single “Highway” went #1 on radio in Canada and Top 10 stateside.