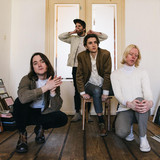 Mozes and the Firstborn

Featuring Mozes and the Firstborn

Playing a potent mix of sleazy grunge and power pop perfection Mozes and the Firstborn hail from Eindhoven, The Netherlands. Their inspirations vary from Guided by Voices and Beck to Weezer and Nirvana.    The Californian label Burger Records released their self-titled debut album in 2014. Since then the band has embarked on international tours with The Growlers, Unknown Mortal Orchestra and together Pangea, crisscrossing the United States and Europe. In 2016 the band released Great Pile of Nothing, a more introvert and mellow LP.    Mozes and the Firstborn released their third full-length album 'Dadcore' in January 2019. Embracing the feel of a mixtape, they blend their favorite styles and genres into an intruiging conglomeration of songs. The band has worked with a number of producers, including producer/mixer Chris Coady (Beach House, Slowdive) and Roland Cosio (together Pangea, Fuzz).