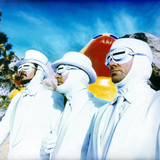 Primus is all about Les Claypool; there isn't a moment on any of their records where his bass isn't the main focal point of the music, with his vocals acting as a bizarre sideshow. Which isn't to deny guitarist Larry LaLonde or drummer Tim "Herb" Alexander any credit; no drummer could weave in and around Claypool's convoluted patterns as effortlessly as Alexander, and few guitarists would willingly push the spotlight away like LaLonde does, just to produce a never-ending spiral of avant noise. All of this means that they are miles away from being another punk-funk combo like the Red Hot Chili Peppers; Claypool may slap and pop his bass, but there is little funk in the rhythm he and Alexander lay down. Instead, they're a post-punk Rush spiked with the sensibility and humor of Frank Zappa. Primus' songs are secondary to showcasing their instrumental prowess. Their music is willfully weird and experimental, yet it's not alienating; the band was able to turn its goofy weirdness into pop stardom. At first, Primus were strictly an underground phenomenon, but in the years between their third and fourth albums, their cult grew rapidly. Released in 1991, Sailing the Seas of Cheese went gold shortly before the release of Pork Soda. By the time of the album's 1993 release, Primus had enough devoted fans to make Pork Soda debut in the Top Ten. After touring for a year -- including a headlining spot on Lollapalooza 1993 -- Claypool revived his Prawn Song record label in 1994 and released a reunion record by Primus' original lineup under the name Sausage. In the summer of 1995, Primus released their fifth album, Tales from the Punchbowl. It was another success, going gold before the end of the year. In the summer of 1996, Primus announced they were parting ways with their drummer, Tim Alexander. He was replaced by Brian "Brain" Mantia, who made his debut on The Brown Album, was released in the summer of 1997. The covers EP Rhinoplasty followed in 1998, and a year later, Primus returned with Antipop. Antipop was a departure from previous Primus albums, as different producers were used on almost every track (including such notables as Rage Against the Machine's Tom Morello, Limp Bizkit's Fred Durst, Tom Waits, South Park creator Matt Stone, and former Police drummer Stewart Copeland), and it featured such guest artists as Metallica's James Hetfield and former Faith No More guitarist Jim Martin. After a supporting tour wrapped up in 2000, Mantia left the band to join Guns N' Roses. Claypool talked about reuniting with former drummer Tim Alexander in the press, but shortly afterward announced that Primus was going on indefinite hiatus. During the ensuing break, Claypool focused on recording the debut album by his side project, Oysterhead (who also included Copeland and Phish guitarist Trey Anastasio), as well as releasing his two-part solo outing, Live Frogs: Set 1 and Set 2. Primus reunited in 2003 with a lineup containing Tim Alexander to release an EP's worth of new material as part of the Animals Should Not Try to Act Like People DVD set. The band focused on touring until 2010, when Alexander once again left the band. Claypool and LaLonde turned to former drummer Jay Lane, and the band went back into the studio to work on a new full-length. In 2011, Primus released their seventh album, Green Naugahyde. Three years later, the band followed up with Primus & the Chocolate Factory with the Fungi Ensemble, an album that found the band reuniting with drummer Alexander to cover the iconic soundtrack to the 1971 film Willy Wonky and the Chocolate Factory. In 2017 they returned with yet another literary-influenced album, The Desaturating Seven, which was inspired by Italian author Ul de Rico's children's book The Rainbow Goblins. Included on the album was the single "The Seven." ~ Stephen Thomas Erlewine & Greg Prato