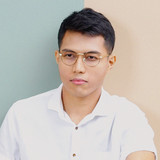 Deny Setiyadi is a musician / multi-instrumentalist / songwriter who describes himself as a ‘mathemusician’ – short for mathematician and musician. Setiyadi began his professional career in music playing for his friends and doing gigs at community events in the Siberian city of Krasnoyarsk in 2016, performing in a two-person band under the name of DENATO (Денато) as the lead vocalist and keyboardist. His debut single 'Sohcahtoa' was released in October 2019 on major streaming platforms. Three months later, second single 'Girl and Her Guitar' hit the stores worldwide and he started to gain some popularity. Setiyadi creates powerful imagery in his lyrics and the songs he wrote were greatly inspired by the people he met at some point of his life, as well as his personal struggles.