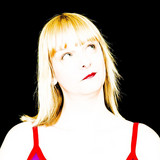 The Bleeding Obvious has one single member: Yorkshire lass Jessica Rowbottom, whose multi-genre songs are sometimes funny, occasionally poignant, and frequently involve her experiences on the LGBT+ spectrum. Alongside more traditional gigs she wrote and toured a one-woman original musical cabaret 'Rainbow Heart', exploring the coming-out process through music, spoken word and comedy. Her performances have drawn comparisons with Victoria Wood, Tim Minchin, The Divine Comedy and Fascinating Aïda. She has more recently been touring new work UK-wide, taking her LGBTQ+ repertoire to L Fest lesbian festival in Wales, and headlining the LGBT+ Pride Picnic in London in 2019. Due in May 2020 the third Bleeding Obvious album 'Dirty Blonde' is disco-heavy, once again incorporating a choir and orchestra. It will be released alongside 'Sunday at Eastmoor Road', an EP of acoustic versions recorded with a grand piano.