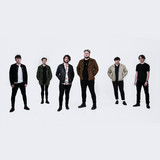 Fresh from the remnants of their former outfit Diamonds in the Dark, Liverpool’s Turquoise Noise have spent the last few months, not so much reinventing their sound, as they have honed it. Searing though often angelic guitar parts are backed by a steadfast rhythm section, creating a perfectly complex bed of noise on which leading man Paul Alan Waters’ idiosyncratic vocals are effortlessly laid.

Inspired by a wide array of artists: from Pink Floyd to The Beach Boys, Tame Impala to The Bee Gees, Turquoise Noise are set to take the Liverpool music scene by storm with their own inimitable brand of radio-ready alt-rock.   The first taste of this, is new single ‘Closer’. Released on May 28th, it’s three and a half minutes of blissed-out indie rock, that while feeling a little psychedelic at times, never quite descends into the realms of full on freak-out.