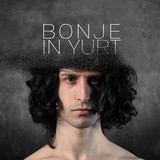 Bonje is the distorted version of the artist's surname and it has become a sort of second identity. An Alter Ego where to escape while being reinforced with songs painted with the colors of the autumn. Yurt stands for the shed of the asian nomads;they are people who wander from one land to another without any other roots a part from those strongly buried in their culture that is brought as an inseparable, essential luggage. Marco Bongini has chosen to enter the world of music with a name that is an authentic manifesto of his intents. He refuses to choose just one channel of communication but just like the nomads he wanders between different ones without finding where to settle because doing so would mean to lose himself and the possibility to fully express his feelings.What reunites all the evanescent pop songs of the artist Bonje in Yurt is their soft sounds that create a sort of future pop folk.-La Repubblica 28 Ottobre 2018