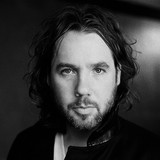 As a founding member of the experimental indie pop group Broken Social Scene, as well as a member of the label that puts out its music, Arts & Crafts, Kevin Drew worked with ten or more musicians in a collective that helped usher in the chamber pop movement. He grew up in Toronto and got his creative start attending high school at the prestigious Etobicoke School of the Arts along with two future members of BSS, Emily Haines and Amy Millan. After his interests changed from acting to music, he teamed up with Charles Spearin for a recording project called K.C. Accidental and released two records. The duo gradually blossomed into the more ambitious Broken Social Scene, and in 2007 he recorded his first solo release, Spirit If..., the first in a proposed series of solo records by various members of the mega-group. His second solo record wouldn't appear until seven years later, following the success, and eventual 2011 hiatus, of Broken Social Scene. While recording his solo follow-up, Drew began working with Canadian singer/songwriter Andy Kim of classic pop group the Archies, which reignited his creative flair and inspired him to finish his second offering Darlings, which was released in March 2014. ~ Jason Lymangrover, Rovi