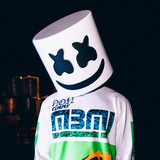 Enigmatic masked DJ/producer Marshmello makes groove-oriented, synth- and bass-heavy electronic dance music that found mainstream crossover success in the late 2010s. In the spirit of similarly cloaked dance figures like Deadmau5 and Daft Punk, Marshmello performs wearing a full-head-covering, in his case a marshmallow mask. Despite his early anonymity, Marshmello's career blew up in 2015 when he began releasing tracks online. From there came shows at New York's Pier 94, Pomona, California's HARD Day of the Dead festival, and Miami Music Week. He also scored a number five Billboard electronic/dance album with his full-length debut, Joytime. Collaborative hits followed, with artists including Selena Gomez ("Wolves"), Khalid ("Silence"), and Bastille (the platinum hit "Happier"). He hit a personal chart peak in 2019 with his revolutionary in-game concert Fortnite Extended Set. Marshmello's career began in 2015 when he posted songs on SoundCloud, including remixes of Zedd's "Beautiful Now," Jack Ü's "Where Are U Now," and others. Soon, he was drawing fans and gaining vocal support from peers like Skrillex, who reposted Marshmello's track "Find Me." High-profile live DJ appearances followed, with shows at Ultra Music Festival and California's HARD Day of the Dead festival, among others. In 2016, Marshmello released a compilation of his previously released tracks, Joytime, which reached number five on the Billboard electronic/dance albums chart and number one on a digital top electronic albums chart. Included on the album was the single "Keep It Mello" featuring rapper Omar LinX. Also in 2016, after a set at Electric Daisy Carnival, Dutch DJ Tiësto jokingly emerged from under Marshmello's mask, fallaciously proclaiming he was the mysterious DJ. The real Marshmello continued to perform and release singles throughout the year, later starting his own Joytime Collective record label. More collaborations followed in 2017, including "Silence" with Khalid and "Wolves" featuring Selena Gomez. Both tracks became Top 30 hits and were certified platinum around the world. In 2018, Marshmello added another hit collaboration to his roster, pairing with British vocalist Anne-Marie for their multi-platinum hit single "Friends." After delivering his second full-length album, Joytime II, he dropped the non-album single "Happier," which featured Bastille's Dan Smith on vocals. The song quickly became a high-charting track, rising into the Top Three in the U.S., U.K., and Australasia. As the popularity of "Happier" continued to rise, Marshmello scored a charting effort with the revolutionary Fortnite Extended Set, a 30-minute mix taken from his 2019 in-game concert that attracted millions of video gamers. By the time summer rolled around, "Happier" had topped the Billboard electronic chart and peaked at number two on the Hot 100. Meanwhile, a collaboration with Chvrches, "Here with Me," began its steady rise up the charts, giving the indie outfit their highest-charting single to date. Marshmello also added additional cross-genre collaborations to his singles list, including "Light It Up" with Tyga and Chris Brown, "One Thing Right" with country singer Kane Brown, and "Rescue Me" with pop-punkers A Day to Remember. The latter track appeared on Joytime III, which arrived in July 2019 and featured guests Slushii, Flux Pavilion, Elohim, and Wiwek. In February 2020, Marshmello joined with Svdden Death for the track "Crusade." ~ Matt Collar