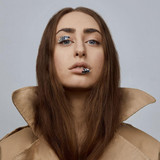 A singer and songwriter whose music exists somewhere between contemporary folk and electronic pop, Fleurie creates atmospheric soundscapes that accompany her personal and heartfelt lyrics. Fleurie is the stage name of Lauren Strahm, who was born in 1990 and raised in Canton, Michigan, not far from Detroit. Strahm took piano lessons as a child, and also sang in church with her family. She wrote her first song when she was just 11 years of age, and began performing her work for others when she was 17. In 2009, under the name Lauren Strahm, she released her first album, a collection of Christian-themed material titled Fly. As Strahm honed her craft and followed her muse, she lived for a while in Sydney, Australia before returning to America and settling in Nashville, Tennessee. Adopting the name Fleurie -- French for "blooming flower" -- she landed a job writing for film and television while she crafted more personal material on the side. In 2013, using a friend's home studio, she recorded and released her first EP as Fleurie, a seven-song effort titled Fear & Fable. Fleurie's second EP, the five-song set Arrows, found her digging deeper into her electronic influences and embracing a lusher production style. In 2016, Fleurie dropped her third EP, Love and War, which she described as a "cinematic album." That same year, she went out on tour as the opening act for Christian hip-hop artist NF. Fleurie released a single in August 2017, a moody, dynamic number called "Hurricane." ~ Mark Deming