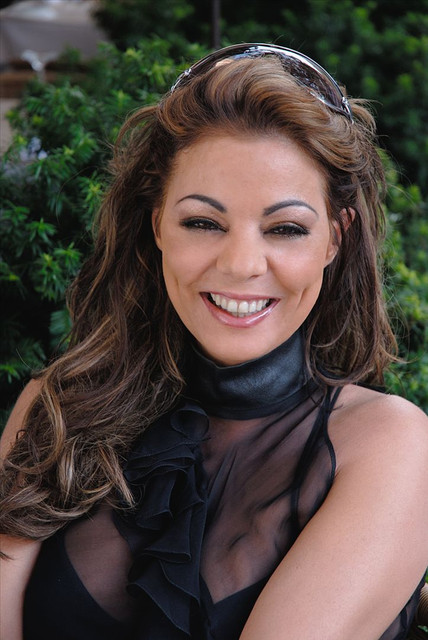 Wildly popular in Europe, Japan, and Russia throughout the '80s and beyond, pop singer Sandra was at one point the German equivalent to America's Madonna. Before breaking out solo, Sandra was part of disco trio Arabesque and in addition to scaling the charts with her own material, she provided the vocals for most of the early hits of international phenomenon Enigma, the studio project of her then-husband Michael Cretu. After a commercial peak in the late '80s and early '90s, Sandra remained sporadically active, releasing new solo material throughout the oughts and into the 2010s. Sandra Ann Lauer was born in West Germany in 1962. She was interested in music from her earliest years, taking dance and guitar lessons as a child and participating in talent competitions in her early adolescence. She was recording solo material as a teenager and in 1979, at age 17 she joined disco group Arabesque. Lauer would sing in the band for the next five years as they enjoyed a ride that included charting singles and a large following in Japan. It was also during this time that she would meet keyboardist Michael Cretu. Cretu had made solo albums and worked as a producer, and the two quickly developed a relationship that was both creative and romantic, collaborating on songs that would become the first Sandra solo material. When Lauer left Arabesque in 1984, she quickly set about fleshing out this material for a solo career. Her 1985 single

"(I'll Never Be) Maria Magdalena" charted all over the world and set the stage for her debut album The Long Play (released later the same year) to follow the same pattern. Second album Mirrors was released in 1986, and in 1987 a synthy cover of "Everlasting Love" became yet another international hit. In 1988, Lauer and Cretu were married and relocated to Ibiza, Spain. There they developed songs for the third Sandra album, 1988's Into a Secret Land. This would come to represent her commercial peak, yielding multiple hit singles and selling well internationally. The album also marked a shift from carefree electro-pop into more moody and dark emotional territory. Through the end of the '80s into the '90s, this dark and mysterious tonality would touch both Sandra's solo albums (1990's Paintings in Yellow, 1992's Close to Seven, and 1995's Fading Shades) as well as the new project her husband was working towards. Conceptualized near the start of 1990, Cretu's project Enigma brought together chilled-out club beats, new age synthesizer tones, and samples of Gregorian monk chants, with the catchier songs sometimes featuring whispery vocals from Sandra. Enigma became a worldwide phenomenon -- their albums sold tens of millions of copies throughout the '90s. As Enigma's success continued, so did Sandra's. The singer moved further away from dance-pop styles with each new album, and reached levels of success in Europe that demanded greatest-hits collections, reworkings of earlier singles, and remixes of her catalog by other artists. Throughout the 2000s, her sound continued to evolve and mature over the course of several albums. 2002's The Wheel of Time produced a few well-received singles and 2007's The Art of Love was a more personal outing, with Lauer approaching lyrics and production for the album in a more hands-on manner. By this time she and Cretu were approaching a divorce and had stopped actively collaborating on each other's projects. She continued living in Ibiza, working on new music and remarrying producer Olaf Menges in 2010. Sandra's output during this new phase of her life included 2009's Back to Life and 2012's Stay in Touch. ~ Fred Thomas, Rovi