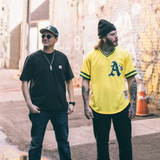 The West Coast is trademark for its raw-energy and free spirits. Few rep that mentality better than Smoakland's Anthony Battaglia and Harrison Hays. Raised in the Bay Area, the Dubstep duo met while attending Boise State University as student athletes. Both returned home following school, but a twist of fate reunified them to pursue their own renaissance through music. Anthony’s early production knowledge and Harry’s DJ acumen quickly made them a synced two-way team. In 2018, the two invoked their love for Bay Area weed and dubstep by forming Smoakland.

With over seven years of production under their belts, they strive to create their own distinct vein of nostalgic, “Old School'' Dubstep. The result to date has brought listeners a unique sound design, fat bass, and rhythmic melodies. They’re inspirations range from contemporaries like Zeds dead, Eptic, & Mersiv; artists who become larger-than-life behind booming soundsystems. While their support and buzz are undeniable, the duo’s mindset is what truly previews their music and journey’s transcendence. Looking forward to 2021, Smoakland promises big releases, collaborations, and to return raw-energy to dance music.