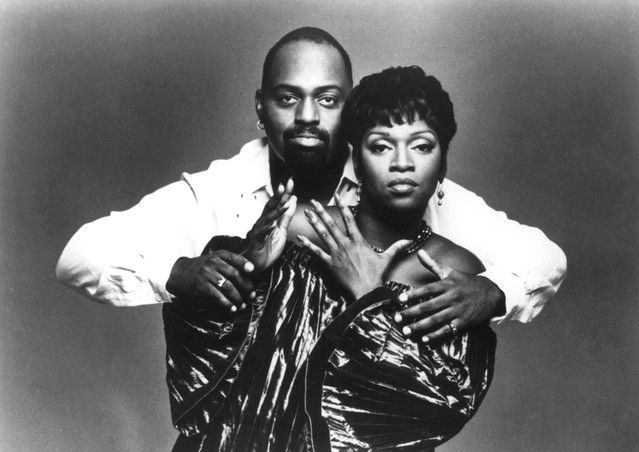 The man many call the godfather of house, Frankie Knuckles began DJing in New York in the early '70s while still a teenager, years before the disco boom which proved to be the first flowering of modern dance music. Ten years later he was in Chicago, putting together megamixes of old disco hits with new drum-machine percussion for appreciative audiences at crucial clubs like the Warehouse and the Power Plant. Another decade on from those first formative steps for house music, Knuckles was back in his New York home, working as a producer and remixer for the biggest pop stars in the business. Inducted to the Dance Music Hall of Fame two years after its establishment, Knuckles was active until his 2014 death. Without him, dance music would be immeasurably different. Born in the Bronx in 1955, Knuckles listened to a lot of jazz as a child, thanks to his sister's record collection. He studied commercial art and costume design before taking his first job as a DJ in 1971. Several years later, he hooked up with childhood friend Larry Levan and the two began working at Nicky Siano's New York club, the Gallery. Levan later moved to the Continental Baths, and Knuckles worked at another club for several months before rejoining Levan. Again, Levan left -- this time to set up his own club, the Soho Place -- and Knuckles continued on until the Continental Baths was closed. A group of entrepreneurs initially approached Levan about becoming the DJ at a club they were starting in Chicago; instead of abandoning the interest in his own club, he declined but suggested his friend Frankie Knuckles. Knuckles moved to Chicago in 1977 and began DJing at the Warehouse, spinning Salsoul and Philadelphia International records in front of a crowd unused to the New York DJing style, which included beat-mixing and the addition of percussion fills (from a separate turntable) to spruce up the sound of traditional soul. In 1983, Knuckles opened his own club, the Power Plant. While Ron Hardy was entrancing a largely gay, uptown crowd at the Music Box, Knuckles introduced the sound to many of the Southside producers who made waves during the '80s: Marshall Jefferson, Larry Heard, Adonis, Steve "Silk" Hurley, and at least half-a-dozen others. After more than 15 years spinning vinyl, Frankie Knuckles began recording as well, debuting with several singles released on the seminal Trax Records. Such efforts as "Your Love," "Baby Wants to Ride," "You Got the Love," and "Angel" (most credited to Knuckles though vocalist Jamie Principle undoubtedly exercised some influence) were among the best tracks released in the Chicago house explosion of the mid-'80s. Knuckles also recorded for Danica ("Let the Music Use You") and worked with younger producers like Marshall Jefferson as well as future Fingers, Inc. vocalist Robert Owens. Just as Chicago house began spreading worldwide during 1986-1987, though, Knuckles returned to New York. He formed Def Mix Productions with David Morales (one of the other major names in house music) and began working on house treatments for the biggest pop stars of the '80s and '90s, including Michael Jackson, Diana Ross, Chaka Khan, Inner City, and En Vogue. Despite the popularity of house in the international arena, the godfather of the music waited several years before the major labels came calling for something other than a remix. Finally, Virgin signed him to an artist contract in 1991 and released his debut album Beyond the Mix. The singles "The Whistle Song," "Rainfalls," and "Workout" moved up the dance charts, though the album failed to connect with pop or R&B fans. Knuckles continued to produce singles and remix tracks, while his second album, Welcome to the Real World, was released four years later. In 2000, the same year he was tapped to mix the first edition of Azuli's Choice: A Collection of Classics series, he broke his ankle while snowboarding. Although he wasn't as active, his critical role in the development of dance music was acknowledged when, in 2004, a stretch of Chicago's Jefferson Street, near the site of the former Warehouse, was renamed Honorary Frankie Knuckles Way. A year later, he was inducted into the Dance Music Hall of Fame with the likes of Quincy Jones, Gamble & Huff, Chic, Sylvester, and François Kevorkian. A bone disease worsened by diabetes led to the amputation of Knuckles' ankle in 2008. That year, he reached many younger ears through a remix of Hercules & Love Affair's "Blind." Knuckles continued to DJ globally and played clubs and festivals in front of audiences filled with dancers born years after he helped create and develop his genre. He unexpectedly passed away at home on March 31, 2014. ~ John Bush & Andy Kellman, Rovi