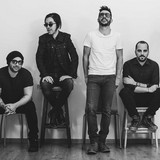 Airport Impressions is a band formed in 2008 and without a doubt one of the most successful acts to emerge from Malta (Europe). Their sound sits comfortably between The Killers, Kings of Leon, and Mumford and Sons. Their music is inspired by rock, pop and folk. Their songs are filled with passion, a uplifting sound and powerful melodies. Most important, the band has the ability to deliver anthemic, U2esque chants while engaging stadium crowds everywhere. A band who loves to play for 200 people or rock out a crowd of 50K

as winners of MTV-Battle of the Band and performed of MTV- Isle of MTV Malta.