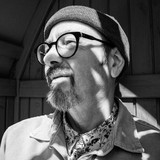 Sometimes forming unwieldy layers of textured distortion and noise. The project is named after the identity Elsey took in the college band The Loch Ness Monster, formed with Martin Howells (Nils Phlamethrower) in 1983. The Loch Ness Monster released 2 vinyl LPs of industrial pop for Hamster Records in the 80s with Elsey recording and producing both releases on a 4 track portastudio. After that, both continued to play and record with various artists, keeping ties with Hamster's Terry Burrows through the experimental/psychedelic outfit The Chrysanthemums, in which Howells played bass. In 2007 Elsey joined Burrows and John M Bowers to add drums and percussion to their doom, drone metal band Tonesucker. After the initial recordings playing drums, Elsey carried on as a permanent member of the band playing an assortment of instruments, but rarely drums. Tonesucker continue to record and perform in the UK and Europe. Elsey's work with Tonesucker provided the inspiration to explore new possibilities. The result was the first album under the Plesiosaur~ alias, 'Memorial', released in 2013. 'Falling' followed in 2015. In 2019 Elsey started a Twitch stream where he broadcasts live improvised performances. Links are available on fourfins.co.uk.