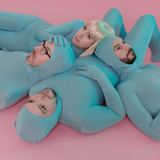 Scale Model is an indie rock/pop band based in Nashville, TN. They combine interweaving guitars and synthesizers with catchy vocal melodies and a danceable rhythm section to create a sound that transcends the staples of pop. After relocating to Nashville from Chicago in 2009, singer/keyboardist Megan Rox and guitarist Dave Johnson solidified the current band lineup in 2011. They released a self-titled EP in August of 2012, and began working on their debut full-length album Star in 2013 with Jeremy Ferguson at Battle Tapes (Turbo Fruits, Pujol, Tristen, Forget Cassettes) and Brian Carter at Paradox Productions (Glossary, The Nobility, The Features). It was mixed by Matt Mahaffey (Self, Beck, The Sounds, Pink). The band released the Deluxe Edition of Star, with select remixes, in 2014. Family life slowed the process of writing new material through 2015 and most of 2016, but the band brought in bassist/synth guru Aaron Irons (The Non-Commissioned Officers, Jasmin Kaset) and went back into the studio with Jeremy Ferguson (Battle Tapes) to record and mix their new EP, Afterglow, in mid-2016. It was released on May 12, 2017 In 2019 and 2020, Scale Model will be releasing several new singles and music videos. Follow us on Instagram, Facebook, Spotify or Bandcamp to get the scoop!