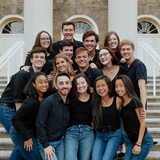 The Pennharmonics are Penn State University's premier co-ed a cappella group and are based out of State College, PA. The Penns, as they've been nicknamed, have been revolutionizing the a cappella community for more than 25 years. They have released several studio albums, and just released a new EP, Sterling! The Pennharmonics have developed a balance between underground selections and mainstream favorites to create an innovative and unique sound that appeals to all audiences. Thanks for listening!