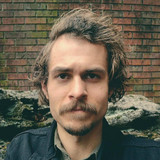 A Delaware-raised contemplative and recent transplant to the broad places of Indiana, Levi Dylan may not be the grandson of the venerable Bob, but he remains a lyric-driven artist writing what he's called "post-cynical folk rock."

Bringing together musical and literary influences ranging from The National to mewithoutYou to Wendell Berry, his work under the Former Ruins name constitutes, in his own telling, "the sound of a true believer's anguished spirituality." Levi released his debut EP, Four Fathers, in November 2017. Recorded as live acoustic single-takes in an empty storefront, Four Fathers rewards with repeat listens. From the internal-rhyme-laden oracles against discontent found in "Cars of Our Youth" to the affirming, wry homage "Delaware"—Levi's longtime home—the songs present a lyrical world of flyover places projected onto the cosmic plane of strange mercy. Levi is currently producing a full-band version of “Cars of Our Youth” for release as a single in early 2019, which will be followed by a campaign to support the production of a debut full-length album.