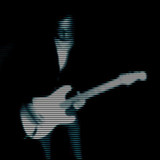 Aleksi Manninen started his career in ambient in late 90's after getting the idea "how to make guitar sound like not a guitar at all?". The experiments led to the first songs by ALEKSI being published in Myspace around year 2000. Advancing on his career almost as slowly as in his songs, the first album Edge of Wind (Kuu Records) was released 2015. Second album with Tapani Rinne and Konsta Mikkonen will be out March 2020. Aleksi has composed music for advertising and short films, as well as played live shows solo and with collaborators.