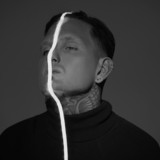 View is a Helsinki-based artist who is often described as the greatest talent in the Finnish urban music scene. View’s music mixes deep and hypnotic vocals with dark and powerful beats to form a unique and recognizable take on modern trap. With a strong visual presence to match the music, View invites to get lost in his cinematic world. Lyrically View (born Juuso Ruohonen) likes to explore the darker places of human mind: “My lyrics have always been deeply personal and will be in the future. Ever since I was little, music has been a way for me to escape the reality. I have always felt different than the rest of the people, and childhood in a small town and in a broken home didn’t make it any easier. Through music I could let out all the pain, hatred and insecurity that I had inside me.” View debuted in 2015 with single “Avalon”, which took the Finnish music media and tastemaker blogs worldwide by storm. With his next releases View was featured in trendsetting media such as The Line of Best Fit, The 405, KEXP, N-Joy, FM4 and Radio SRF. In Finland View came 2nd in “Ones to Watch 2016” poll operated by big Finnish music media Rumba and YleX. View delivered on the hype with the highly personal and critically acclaimed debut album “Leave a Comment” (2017) as well as big festival gigs in Finland and abroad. In April 2020 View released I See the Same Dream Every Night - EP, which reveals the firs half of View's second album. Another half will be released in 2021.