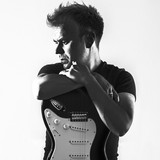 Critically noted as “one of the most complete performers of the new generation”, NYC-based guitarist Giacomo Baldelli is focused on exploring works of the 20th century, but also on developing a new 21st century repertoire for guitar and electric guitar. He is an accomplished soloist and chamber musician, and has performed throughout Europe (Italy, Germany, France, England, Czech Republic, Poland), as well as the United States. He has performed many solo recitals in concert seasons and venues such as Aperto Festival in Reggio Emilia (Italy), “Cinque Giornate” Contemporary Music Festival in Milan (Italy), University of Leeds International Concert Series (UK), BUCNM Concert Series in Boston, Alia Musica Festival in Pittsburgh, Compositum Musicae Novae in Miami, National Sawdust and Spectrum in New York (USA). From 2006 to 2013 he was a member of Icarus Ensemble. During that period they were featured in renowned festivals such as the HCMF (Huddersfield, England), Biennale Musica (Venice, Italy), REC/APERTO (Reggio Emilia, Italy), Sincronie (Milan, Italy), and Gaida Festival (Vilnius, Lithuania). His project NIDRA won the call for new projects at the Queens New Music Festival 2015 and was premiered at The Secret Theatre in New York City in May 2015. NIDRA is co-produced with the video artists OOOPStudio and was defined by The New York Times as “ a new music tour de force for electric guitar featuring video”. NIDRA was recently presented at Biennale Musica 2018 in Venice (Italy).