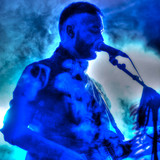 Nico Guerrero is a French experimental composer & guitarist based in Paris+Reykjavik. He made an impression with his dark shoegaze Vortex project in the early 90's. The 1st album Eksaïpnès (Les Disques du Soleil et de l'Acier, 2000) laid down the foundations for the frozen, cosmic and noisy universe that Nico would explore later. Weaving textures of intense cosmic drones, the strings of his sole guitar resonate like hallucinatory echoes of organ clusters, expanding towards the infinite and implosing at the same time. Ghost sounds appear from a swirling Magick chaos. In 2015, he composed with Rhys Chatham instrumental pieces in duet. They also played together on stage in duet, and Nico co-conducted the Rhys ensemble of 100 guitars. After the Live at the Nordic House - The Nordic Intimate Sessions Lp (2019) recorded during the Iceland Airwaves Festival, where he paid homage to Coil and Nico, he composed his latest studio album Streams of Oblivion (Silent records/June 2021) in Reykjavik during the winter 2021. Imbued with esoteric references, he builds a cathedral of sounds of haunted drones with depthcharges of guitar overtones, all dedicated to the Icelandic telluric forces, volcanoes, entities, ghosts and deities. Cold ambient could be a good definition for this sound, deep, close to ceremonial, bright or abstract, evoking a deep melancholy. It could remind the mood of Current 93, Hilmar Örn Hilmarsson or even some works of Stephen O'Malley . www.nicoguerrero.com