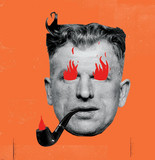 From the bowels of the underworld, you can hear the echoes of this devilish saxophone combo that has starred in the hottest tour of 2019 with their single "Voodoo shoes". The sound of the Averno has its roots in the R&B of the sixties and cooks up its own songs; it rumbles through your eardrums and hammers your hips until you surrender to the ecstasy of its rhythms and you can not help but dance and dance. You may have heard of them as the greatest guest wind-section, but I assure you that you will not have tasted the true flames of the Averno until you see them live. LOS SAXOS DEL AVERNO were born as a stratospheric quartet of saxophones that accompanied the rock group Ginferno. Together, they won the prize for 'Best Album of World Music' in the "VI Awards of Independent Music 2014".

In 2015, they began to collaborate as a guest metal section with other fantastic groups, such as The Limboos,