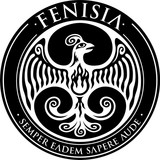 Fenisia was born in 2009 in Rome, Italy, influenced by the sound of deep south of

U.S. “ the Southern Rock” they elaborate a style that blends a mighty Hard Rock with Metal riffs. Inspired by the imagery of a rising phoenix, they adopted the original moniker 'FENISIA'. A symbol of rebirth and renewal. Starting 2011, FENISIA wrote and recorded 'LUCIFER', a concept album with its own com straightforward - and yet complex - musically logical path. 'Metal of Enlightenment', as the band likes to call it. The album was recorded in Rome (Forward Studio) and mastered at Sterling Sound, NY. At the same time, the band began performing some of the brand-new LUCIFER songs live, at some of the most important venues in Rome in front of large crowds, opening for major acts such as The Misfits, Paul Di'Anno (formerly of Iron Maiden) and Hobbs. As LUCIFER gets worldwide distribution in 2012. In 2015 Fenisia present their Second Album Titled "Fenisia Café", Produced & Recorded & Mixed by Ray Sperlonga in the Rosary Lane Studios, mastered by Colin Davis from Pacheco California, The Fenisia Cafè inspired by Procope cafè paris, cradle of the Enlightenment, it is the the second Chapter of the concept album started with Lucifer, carefully prepared and developed after many concerts and a long work in the studio.