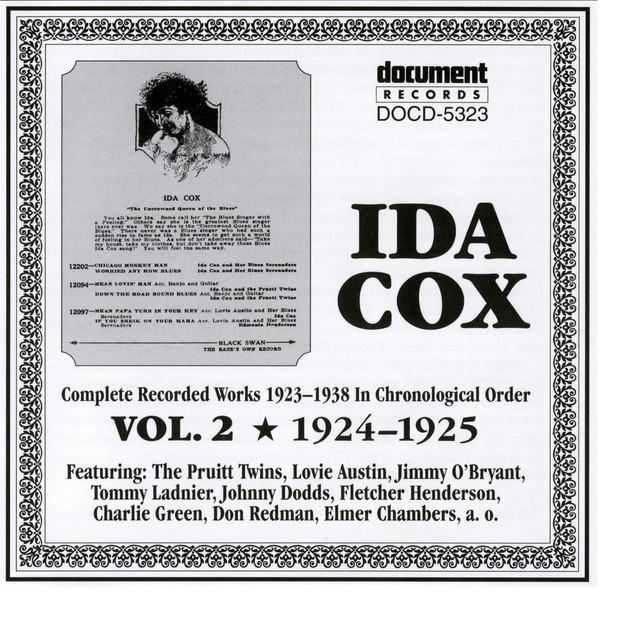 One of the finest classic blues singers of the 1920s, Ida Cox was singing in theaters by the time she was 14. She recorded regularly during 1923-1929 (her "Wild Woman Don't Have the Blues" and "Death Letter Blues" are her best-known songs). Although she was off-record during much of the 1930s, Cox was able to continue working and in 1939 she sang at Cafe Society, appeared at John Hammond's Spirituals to Swing concert, and made some new records. Cox toured with shows until a 1944 stroke pushed her into retirement; she came back for an impressive final recording in 1961. Cox left her hometown of Toccoa, GA, as a teenager, traveling the south in vaudeville and tent shows, performing both as a singer and a comedienne. In the early '20s, she performed with Jelly Roll Morton, but she had severed her ties with the pianist by the time she signed her first record contract with Paramount in 1923. Cox stayed with Paramount for six years and recorded 78 songs, which usually featured accompaniment by Love Austin and trumpeter Tommy Ladnier. During that time, she also cut tracks for a variety of labels, including Silvertone, using several different pseudonyms, including Velma Bradley, Kate Lewis, and Julia Powers. During the '30s, Cox didn't record often, but she continued to perform frequently, highlighted by an appearance at John Hammond's 1939 Spirituals to Swing concert at Carnegie Hall. The concert increased her visibility, particularly in jazz circles. Following the concert, she recorded with a number of jazz artists, including Charlie Christian, Lionel Hampton, Fletcher Henderson, and Hot Lips Page. She toured with a number of different shows in the early '40s until she suffered a stroke in 1944. Cox was retired for most of the '50s, but she was coaxed out of retirement in 1961 to record a final session with Coleman Hawkins. In 1967, Ida Cox died of cancer. ~ Scott Yanow & Stephen Thomas Erlewine, Rovi