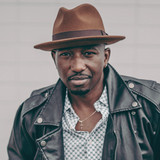 Corey Tucker, is a Soul Singer/Songwriter and American Recording Artist, native of Tennessee. He moved to Cincinnati, Ohio at an early age. It was that move that would shape Corey’s perception of racism, poverty, and exclusion. Music became his voice and passion. It became the thing he found true. His vocals have been described as "smooth, rich, classic and soulful" reminiscent of the early 60’s soul legends. Corey spent most of his early years performing in church and school, singing and directing choirs, and helping other artists find their voice. He hoped music would be his life's work; not for money or fame, but to share stories. The stories of hope, pain, faith, and love. Corey sees music as a way to unite people instead of the divisions he encountered. Corey is currently recording his highly anticipated sophomore album. His style of catchy, stuck-in-the-head hooks to surreal live performances to emotional ballads appeals to anyone that appreciates honest lyrics and storytelling. "Everything I've been doing has lead me here, even the heartbreak. This record will be an open door to my soul, your soul." Corey is not your average soul singer/songwriter. He knows his way around instruments, performing live, writing, arranging, and recording studios. Corey is one of those rare artists with the potential to have a lifelong music career. You won't be disappointed.