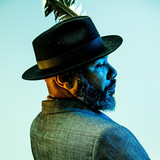 Anthony Joseph has released seven previous albums – six on Heavenly Sweetness - and collaborated with Archie Shepp, Keziah Jones and Meshell Ndgeocello who produced his album, Time in 2014. While often compared to Gil Scott-Heron in interviews a better parallel, in terms of this release, might be made with Shepp’s poetic forays, thanks to the often highly expressive jazz foundations that centre Jason Yarde’s own multi-award winning pedigree in the genre. Yarde’s track record is equally matched by Joseph’s own impressive run of awards and accolades, not only as a musician, but as a poet and author often dubbed the “leader of the Black avant-garde in Britain.” Joseph’s 2018 novel, Kitch: A Fictional Biography of a Calypso Icon that recreates the life of Lord Kitchener was shortlisted for the Republic of Consciousness Prize, the Royal Society of Literature’s Encore Award and longlisted for the OCM Bocas Prize for Caribbean Literature. In 2019, Joseph published his third novel, The Frequency of Magic through Peepal Tree Press.

The same year, Joseph was awarded a Jerwood Compton Poetry Fellowship. In 2020, he received a Paul Hamblyn Foundation Composers Award.