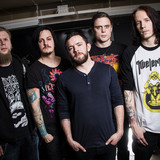 IMPLODE - was formed back in 2006 in a small town of Sweden called Mariestad.

With the release of their second demo “Memento Mori”, Implode received the title “Best unsigned act in Sweden” by Close Up Magazine and the demo itself collected tons of good reviews. And a record deal with Supernova / Cosmos Music was signed for the release of the debut album “The Hour Has Come” which was released in 2011.