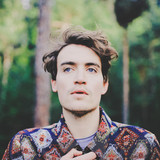 Following the desire to make music the center of his life, singer/songwriter Chriz Rappel established his project „Saguru“ in the beginning of 2016. It’s not only about performing the atmospheric Indie-Pop songs in the best possible way, but also about presenting completed songs in a new way during the live performances, through collaborations with a variety of different artists. Starting to write music in the age of 11, he developed a unique sound, influenced by various artists, as well as his more rock sounding first band „Red Indicators“, with which he managed to record a debut album and make music videos in a complete DIY way in 2015. During his teenage years Arctic Monkeys and especially Alex Turners solo project were his biggest influence as they have pushed his sound towards the Indie genre in the first place. Also Bon Iver, Jose Gonzales, Ben Howard and Grizzly Bear had a big impact on the development of his sound as well as different genres most of all Jazz and post-rock. So with the desire of investing a lot more time into music, Chriz started his new project, following his ideas of sound solely. Luckily he was able to find a producer based in Munich, who saw the potential in his new songs and in 2017 they started to record them in a professional way.