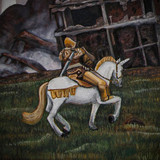 Multi-instrumentalist, songwriter and producer Tully McCully (Terence McCullagh) is a legend in the South African music scene with many hits to his name, both with his own band and other artists. Gordon Mackay is a British classically schooled virtuoso electric keyboard player, known for his involvement in the Johannesburg prog/rock scene with his brother Duncan as well as his compositions for film, TV and ballet. After sharing the stage for several years as part of McCully Workshop, the two veteran musicians have now come together under their own names, creating music that is complex, arresting and at once personal and universal.