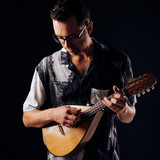 Bio Luís Peixoto is one of the most acclaimed Portuguese folk string players. After integrating and accompanying countless groups and artists, in 2017 he launched his solo career with “Assimetrico”, which brought him wide recognition. Always looking for new musical paths, and continuing in his own name, 2021 is the year to give birth to “Geodesia", an album with an updated sound and focused mainly on the mandolin. He has been awarded with international album awards such as "Best Original Composition" - "Jumping bits" (2011), "Best Folk Album of the Year" with "Assembly Point" (2011) and "Trim" (2014) by the XI and XIV Opinión awards.   Also to highlight the 1st prize at the Folkherbst Festival Malzhaus with "Anxo Lorenzo Trio”.