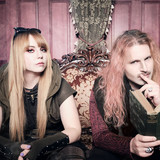 Season of Ghosts is a spiritually groundbreaking, intergalactic music project, dedicated to the love for the unseen and film soundtracks. Serving up a brash mix of guitar riffs, harsh electronics and powerful, compelling vocals, through the eerie spectrum of a Sci-Fi, horror movie, Season of Ghosts has received critical acclaim worldwide for its cross-genre sound and soul- awakening, motivational storytelling. Conceived by Sophia Aslanides, in the heart of Tokyo and completed by Zombie Sam, drawing influences from Japanese, American and European heavy rock and metal,the project came to life in 2013, releasing the debut album, “THE HUMAN PARADOX”, in 2014. Season Of Ghosts was definitely something different from the norm that spoke of huge potential, and the fan-base that followed Sophia in the aftermath of her split from Japanese trance metal act, Blood Stain Child, grew, finding deeper roots as time moved forward, thanks to the band's authentic connection to its audience, as well as its passionate performances.

In 2018 Season Of Ghosts created an unapologetic, cinematic album, entitled "A LEAP OF FAITH". The band, that is now based in London, U.K., has appeared at some of the most notable festivals, venues and comic conventions worldwide, alongside Lacey Sturm (ex- Flyleaf), Share Ross (VIXEN), Therion, Xandria, Sirenia, Leaves' Eyes, Diabulus in Musica, Yousei Teikoku and JUPITER, among others and is currently manifesting a third studio album.