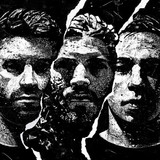 BRONSON is the new project from Seattle’s ODESZA and Australian electronic powerhouse, Golden Features. The trio of Harrison Mills, Clayton Knight & Tom Stell first met at a music festival in Perth, Australia in 2014, and formed an instant connection. Music was the environment in which they bonded, but friendship was the foundation, built on camaraderie, mutual admiration and implicit trust. In truth, Harrison and Clayton had become drawn to the darker edges of dance music; while Tom was intrigued by the lush soundscapes his counterparts were known for – not the influences that were typically elemental in ODESZA & Golden Features’ respective sounds or fanbases. Recording across time zones and oceans they passed demos over Dropbox and met up on FaceTime calls. Whenever one of them had a spark of something interesting, they'd keep the outlet alive; a safe haven for the ideas that couldn't find a home in their everyday artistry. This culminated in 2018, when they convened in person in Berry, Australia; they wanted to see what would happen if they holed up in a room together, to give the project space to grow. In that moment, the trio knew that the result of their work together was greater than the sum of ODESZA & Golden Features. BRONSON wasn't about melding those facets, it was its own entity: something distinct from anything they'd ever created. They embraced this newfound limitlessness, which in turn manifested itself in the form of the debut, self-titled BRONSON LP.