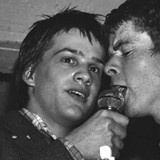 Spring 1978 15 year old Joris Pelgrom, or as he was known Half Twee, was asked by No Fun record label owner Hansje Joustra and God’s Heart Attack singer Ronald van den Brink if he wanted to record a single.

Lacking any musical talent Joris asked Pieter ‘Piep’ Kooijman, guitarist with God’s Heart Attack, to help with the music. Pieter came up with two great tunes and Joris wrote the words. ‘I don’t care what the people say’ about no more or less than what the title indicates and ‘Half Twee’ lyrics influenced by the Dada poetry that he was reading at the time. The songs were recorded with the rest of God’s Heart Attack members and Frank ‘n’ Stein guitarist with The Softies. As soon as the record was released it became a success in the Amsterdam punk underground scene. So much so that it was decided that gigs were in order. First Joris did some guest appearances at God’s Heart Attack concerts. But soon, after Pieter and Joris had written ten more songs, concerts as Helmettes were given around Amsterdam and other Dutch places. These days the record is a very much sought after collectors item, getting high prices on ebay and at record fairs. Sometimes fetching more than $400.