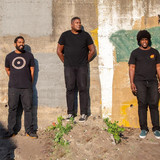 Rough Francis are a hard-edged, musically adventurous rock band from Burlington, VT, who also represent the second generation of some of the unsung pioneers of Midwest punk rock. In 1973, Bobby, Dannis, and David Hackney were three brothers from Detroit who had been playing in funk and soul combos but were inspired by the guitar-fueled mayhem and political rhetoric of the MC5, the Stooges, and other high-energy bands from the glory days of Detroit rock. The Hackney brothers formed a band, Death, and in 1975 they released an independent single, "Politicians in My Eyes." Death's aggressive, attitudinal swagger and anti-authoritarian stance were clear precursors to the sound and spirit of the looming punk rock movement, and the record would have sounded prescient and surprising even if it weren't for the fact the Hackney brothers were African-American. Death failed to find an audience outside Detroit and a possible record deal fell through, leading to the band's breakup in 1977. Bobby and Dannis Hackney left Detroit and settled in Burlington, where Bobby would raise five children and he and Dannis would form a long-running reggae band, Lambsbread. Bobby never told his kids about his adventures with Death, but three of his boys -- Bobby Hackney, Jr., Julian Hackney, and Urian Hackney -- grew up with a taste for aggressive rock & roll, and when Bobby Jr. heard the rare Death single (which had been reissued on a bootleg punk compilation after becoming a sought-after collectors item), he recognized his father's voice. After Bobby Sr. dug his copies of Death's demo tapes out of the attic, his sons were passionately inspired by their dad's rock music, and in 2008 decided to form a band that would follow in Death's footsteps. The name Rough Francis came from a nickname sometimes used by David Hackney (who had succumbed to cancer in 2000), and in addition to Bobby Jr. on vocals, Julian (aka Jewels Isum Sparks) on guitar, and Urian on drums, the band also includes Steven Hazen Williams on bass and Dylan Giambatista and Paul Comegno on guitars. Embracing the same mixture of hard rock and proto-punk as Death as well as the melodic accents of classic British Invasion-era tunes, Rough Francis began playing club dates in Vermont and when Death's 1975 recordings were finally released in 2009 on a collection called For the Whole World to See, Rough Francis shared the stage with uncle Dannis and dad Bobby Sr. as they played a handful of Death reunion shows. Rough Francis also got a career boost when rapper Mos Def invited them to open a tour for him in the fall of 2009. A four-song EP, Introducing... Rough Francis, was released in March 2010. ~ Mark Deming, Rovi