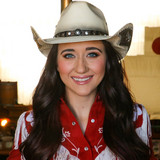 With several national tours under her belt that captivated audiences across the U.S., country music singer/songwriter ASHLEY WINELAND has become a favorite at venues and festivals, a frequent guest on television and radio shows alike, and is often the subject of newspapers, magazine articles, and top music blogs. Her voracious vocals, relatable demeanor, and soulful sound have left an indelible impression. Along the way in her musical journey, this diminutive girl-next-door with a voice and heart as vast and vibrant as the Arizona desert has amassed a dedicated global fanbase, along with a colossal following of over 750K followers on social media. Possessing the impassioned spirit of an old-world troubadour, Wineland’s enthralling songs strike a chord of authenticity while capturing the heartbeat of the heartland. This scintillating storyteller is on a quest to bring back the core elements that are sorely missing from the genre...and isn’t it about time for some TRUE COUNTRY? Learn more about Ashley Wineland at www.ashleywineland.com.