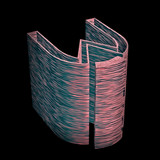 Underwoods is a project that combines electronic atmospheres with a powerful and strong alternative/new rock sound. The live debut takes place in 2016, a very important year that defined the sound and the attitude of the band. After winning Emergenza Festival Italia, the most important international contest for emerging bands, they played at the 2017 Taubertal Festival in Rothenburg, Germany, alongside bands of the calibre of Biffy Clyro and Rise Against concluding the year with a tour through Italy e Switzerland that lasted until the first months of 2018. This series of opportunities have influenced on the professional and artistic growth of the band. In January 2018 the first live video of the band has been published, UNDERWOODS | HEADPHONE SESSION, a session of live recording with the audience in wireless headphones. The tracks of this concert has been published as an album on the main streaming platforms achieving great diffusion and response.  During the summer period of 2018 the band had an intense activity playing in clubs across Switzerland, Italy continuing the experience in several clubs and European festivals such as the Mugstock Festival (UK) and the Bute Festival (UK). In the beginning of 2019 the band toured the Netherlands playing in 4 venues between Amsterdam and Leeuwarden. On the 6th of December 2019, Underwoods released their first singles “In a Hole” - “Neve” - “Upside Down”. A promotional Tour will be soon announced.