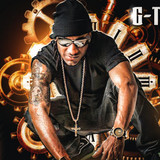 From Humble Beginnings, G-Terra is very passionate about music and has been doing it for years, achieving a new level of diversity. Starting out at an early age, Terra wrote songs & entered Talent shows all over Spanish Town. He Consistently focused on Music as a Young man until friends became very interested & started asking to hear songs on a daily basis. The Word quickly spread around St. Jago High School, where he attended & did most of his early songwriting. A Group was Formed by G-Terra & High school friends Ricardo Redwood & Dwayne Lloyd called The Fross Crew. They wrote songs together & performed in Local & Popular Clubs in Jamaica. The Group Split Up soon after due to work issues, when G-Terra Moved from Spanish Town to Miami, FL USA where he got his 1st job as a painter, G joined the US Army as a way to establish himself & not be dependent on anyone. The Music Followed Him wherever he went as he never stopped writing songs. The Inspiration was overwhelming & No One Really Knew that he was a walking Jukebox, A very diverse artist That loves writing Original music. Being a Traveler since childhood, he adopted to being an all round Songwriter. Definitely One Of the artists to watch. G’s Music doesn’t fall short from the word remarkable, The songwriter knows how to catch the ears of anyone who has the time to Push Play. Inspired by Bob Marley, Tenor Saw, Busy Signal, Vybz Kartel, Shabba Ranks, Bounty Killa, B.I.G, Tupac, Rakim & Many Reggae, Dancehall, Hip-Hop Artists.