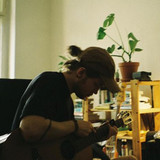 All The Luck In The World

Featuring All The Luck In The World

All the Luck in the World is comprised of three songwriters from the east coast of Ireland. After garnering a small following online with a series of home recorded songs, the band released it's self-titled debut record in 2014 with Haldern Pop and Barfilm Records. In 2015, the band created a home studio space in the Wicklow countryside, and aptly named it Haven. It was between here and Golden Retriever Studio in Berlin that they worked on their second album. 'A Blind Arcade' was released in February 2018, garnering a loyal fan base and helping the band reach significant milestones. After a year of extensive touring following their sophomore release, the band began working on new music. With the release of 'Equinox' and 'Waves Poem', All the Luck in the World gave the first lead to where their musical journey will take us in 2021. With the latest single 'Only Avenues'; the three-piece announced their third studio album 'How The Ash Felt', which will be released on 12th November on Humming Records.