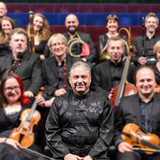 Keyboardist Christopher Hogwood established the Academy of Ancient Music in 1973, using as his model an ensemble that had been founded in 1726 to perform music that was at least 150 years old. Hogwood's orchestra was one of the first in modern times to perform Baroque works on Baroque instruments, comprised of members who were not only masters of their instruments, but also scholars of performance style of the period. Taking inspiration directly from the music’s composers and using period-specific techniques, instruments and original sources, the ensemble’s discography numbers over 300, many of which are still considered definitive performances (among its countless accolades for recording are Classic BRIT, Gramophone and Edison awards). It has now established its own record label, AAM Records, and is proud to be the most listened-to orchestra of its kind online, crossing the one-million monthly listeners mark on Spotify in October, 2019. Richard Egarr became Music Director in 2006, and continues to lead to orchestra to this day. 2019-2020 season highlights include performances of Dussek's long-lost Mass in G, Dario Castello's Sonatas (Book II), and Montiverdi's 𝘐𝘭 𝘳𝘪𝘵𝘰𝘳𝘯𝘰 𝘥'𝘜𝘭𝘪𝘴𝘴𝘦 𝘪𝘯 𝘗𝘢𝘵𝘳𝘪𝘢 (in partnership with Longborough Festival Opera), alongside partnerships with Stephen Fry, Viktoria Mullova, Chen Reiss, Mary Bevan, Benjamin Appl, Alison Balsom, Rowan Pierce and David Blackadder. Visit www.aam.co.uk to find out more.