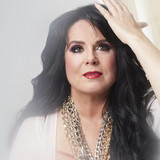 Kaija Koo (born Kaija Kokkola, September 10, 1962, in Helsinki, Finland) is one of the most successful female singers in Finnish music history. She has sold over half a million records -- a significant number for a country of five million people -- and her 1993 release Tuulten Viemää (Gone with the Winds) is the all-time best-selling album by a female solo artist in Finland. Many of her other records have sold in gold and platinum numbers. Kaija's interest in music started from early on. She practiced guitar and piano as a child, and had her first band at age 14. By the age of 17, she took a big leap toward her current status as a vocalist in Steel City, one of the first Finnish disco groups. She wasn't restricted by genres, singing backup for Maukka Perusjätkä -- a chain saw-wielding punk rocker -- as well as Sakari Kuosmanen and Jimi Sumén. Her session work took her, again as a backup vocalist, to two Eurovision contests and she represented Finland as a solo artist in 1985's Sopot Music Festival Grand Prix. Her first solo album was 1986's Kun Savukkeet On Loppuneet (When the Cigarettes Have Run Out), which received some radio play but failed to chart, but her budding career almost ended when her father died in a plane crash during the recording sessions. She returned to school, and little was heard from her during the next seven years. When she finally decided to return to the spotlight in 1993, it was with small expectations but a lot of confidence. Tuulten Viemää took Finland by a whirlwind. Given birth to by Kaija Koo and her writing partner, husband/producer Markku Impiö, the record was rejected by two labels before it was hesitantly taken on by Warner. It was a personal pop album with catchy melodies and smart lyrics. It exploded to the charts and stayed there for 66 straight weeks. In next year's Emma Awards (Finnish equivalent to the Grammys) she cleaned table by winning five major categories with the album. The follow-up, 1995's Tuulikello (Wind Clock), sold briskly, and further albums like Unihiekkamyrsky (Dreamsandstorm, 1997) and Tinakenkätyttö (Tinshoegirl, 1999) solidified her status as one of the most-loved artists in her native country. Tuuleen Piirretyt Vuodet 1980-2000 (Years Sketched in the Wind) collected her best-known hits and was followed by a steady stream of new albums up until 2005's Christmas record Joulukirkossa (In a Christmas Church). Kaija Koo and her husband separated in 2006 to the shock of her legions of fans, leaving the media to speculate about the impact this would create for her future records. ~ JT Lindroos, Rovi