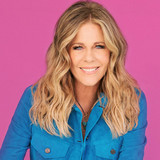 With her album, Halfway to Home—the second in a series of three new records—Rita Wilson continues to establish herself as a significant, rising singer-songwriter. This latest chapter, and her ongoing creative development, is a manifestation of her view that all of us keep growing and changing, whether we intend to or not. “Everybody is a work in progress,” says Wilson. “I don’t feel that we’re ever at the place we want to be. Just when you think you’ve got it made, something throws you for a loop. I know I’m not perfect, but I just keep trying—I’m out there, flawed, but trying my best. So I wanted to write about connecting to those parts of you that aren’t finished, they’re just ‘halfway to home.’ ”   Where last year’s acclaimed Bigger Picture was spare and intimate, Halfway to Home stakes out new sonic territory, the place where Southern California rock meets Nashville country. “When I was growing up,” says Wilson, “the thing that grabbed me in music were the stories—like ‘Ode to Billie Joe,’ which is full of mystery, intrigue and tension, or the Beatles’ ‘She’s Leaving Home,’ which made me wonder about each person in that story; the mother, the father, and the girl. In April 2020, Rita released a remix of Naughty By Nature's "Hip Hop Hooray" in support of MusiCares COVID-19 Relief Fund. Now, listen to her latest EPs, 'Trilogy I' & 'Trilogy II'.