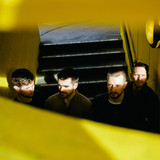 Playing emotive indie-rock reminiscent of Frightened Rabbit, Augustines, The Maccabees and Bombay Bicycle Club, Bengal Lancers is the result of four best friends failing to give up on a pipe dream. They’ve grown from playing dimly lit pubs to selling out shows at some of London’s most loved venues such as the Old Blue Last; alongside scoring festival slots supporting household names like The Fratellis. The fanbase has increased alongside the venue capacity, and through the release of the “Last Orders” EP in 2019, they received widespread acclaim, including support from rock mainstay, Radio X’s John Kennedy. ​Having made a triumphant return at the back end of 2020 through the release of single Morning Light, London four-piece Bengal Lancers are delighted to begin 2021 with beautiful new track Birds, out on 22nd January 2021. A song about checking in on one another, Birds asserts that everyone has their own internal struggles and implores us to make sure that they know that they are loved and have support if they need it.