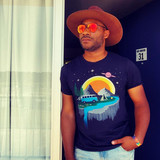 "Listening to this is like driving down a long desert highway...", "DRIFTING sounds like a movie soundtrack...", "He has a wonderfully unique voice...", and "This song is really lovely, you've definitely got something special here..." are some of the things people say about Toney Rocks. His sound and approach is different than anything out there ... very different, yet familiar. Toney Rocks is an artist caught up in the vortex of erratic cross-country tours, using a pen to dig for a not-so self-evident truth, chasing an unheard sound and rubbing a match against a brick wall looking for a spark. There doesn't seem to be another way for him. He's crossed the great barrier into the realms of a chaotic maelstrom where his obsession has taken over reason. Red Planet Session is the latest release from the singer-songwriter. On Sunday May 20, 2019 Toney Rocks gathered with his band, The Rejects, and met up with engineer, Joe Smiley, to capture a live performance of three songs. This became known as the RED PLANET SESSION. The EP features three songs that highlight the essence of Toney Rocks as a writer, producer, and artist. He approaches sound and story like exploring uncharted territory versus existing in the safe realms of an established dogma. The way he layers his smooth dark voice over haunting psychedelic live loops guided by deeply introspective lyrics, it's evident that he doesn't hear it like anyone else; nor does he want to.