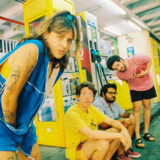 Masok are a four-piece future soul band based in TLV, comprising of Jenny Penkin, Noam Havkin, Tal Kohavi and Omri Shani. The four started working on their debut album in 2018, titled “The bigger the risk”, released (Nov 19) digitally and on vinyl on “Raw Tapes” records, and have been working on a new EP, slightly different from their first one, to be released in 2021.   Taking the front - Jenny Penkin is a singer-songwriter whose range goes between R&B, soul and Hip-Hop and her warm voice and smooth phrases bring a fresh color to the table. Accompanying her is Nomok, who’s in charge of production and keys, influenced by jazz harmonies, synthesised sounds and Stevie Wonder. Tal Kohavi’s slick grooves, tight drums, and crispy percussions contribute to the rawness of Masok’s music.  Completing the puzzle, Omri Shani, who’s more influenced by the indie rock scene, brings unique aesthetics and laid-back mentality to his bass lines.